From Land’s End to La Paz Monthly Fishing Report by Gary Graham Welcome to one of Cabo’s best kept secrets — the winter wonderland of sportfishing, when the fishing is hot but the weather is not. Striped marlin are one of the big draws offshore up on the Finger Bank nearly 50 miles north, where literally herds of billfish feed on the acres of bait that seem to show up there this time of year. The feeding frenzy of billfish, yellowfin tuna, wahoo and even a few dorado drive the fleeing sardina to the surface where the huge frigate birds hover above, swooping down from high in the sky to snatch the baitfish leaping out of the water trying to avoid the indiscriminate predatory fish of all sizes. The spectacle is played and replayed often throughout the day. [caption id="attachment_3153" align="alignright" width="300"] 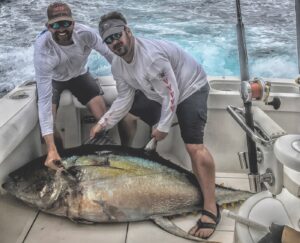 Photo courtesy of David Brackmann calientefishing.com[/caption] Beyond belief? Steve Brackmann of Huntington Beach, Calif., fishing aboard the 40-foot Cabo Sport fisher charter boat CALIENTE caught a 322-pound yellowfin tuna on a live mackerel using 40-pound monofilament after a 2.5-hour fight while casting to feeding striped marlin under some frigate birds up on the Finger Bank … a day that began with seven striped marlin released after an epic previous day when Steve and his buddy released 37 striped marlin. Inshore, closer not far from the harbor, the fishing has been equally as good for inshore species. Sticking to a similar ‘catch and release’ format, anglers have found exciting roosterfish and jack crevalle as they too have been feeding on the surface and biting with reckless abandon. Live bait, plastic lures or even fly-fishing tackle all seem to be getting the job done. Another popular player is the sierra which are seldom released as they are the prime ingredient for many ceviche recipes. Heading up into the Sea of Cortez there is always a chance of encountering some infamous north winds that attract wind surfers while repelling eager anglers with a field of whitecaps. Closer to shore, off Puerto Los Cabos while drift fishing over shallower rocky reefs, anglers found a rich assortment of quality-eating species, such as leopard grouper, yellow snapper, triggerfish, barred pargo, island jack and others. And there are plenty of smaller yellowfin tuna that can be cooked in so many ways. Another popular catch off Punta Gorda and Palmilla area has been the not only tasty, but also speedy, wahoo that often travel at warp speed the length of a football field before being subdued. Up toward East Cape the wind lovers are enjoying the strong north winds almost daily. When it backs off the fishing picks right back up for smaller roosterfish and jacks cruising along the color line close to shore, with more of the same farther up, all the way to La Paz, as the winds continue. Whale watching is another favorite pastime this time of year if your family isn’t into the fishing scene. Perhaps you can lure them out for the morning to observe blue, gray and humpback whales cavorting on the surface with their easy-to-spot misty spout glistening in the morning sun.[/vc_column_text][/vc_column][/vc_row]]]>