There is nothing to show here!
Slider with alias footer-ads not found.

By Katia Silva Marine Biologist and Guide at Cabo Trek

The whale shark is a popular focal species in the marine tourism industry. However, the ancestry of this shark goes back to the Jurassic and Cretaceous periods 245-65 million years ago, when the present groups of sharks began to appear. It was not until 1828 when the first whale shark specimen known to science was discovered off the South African coast. 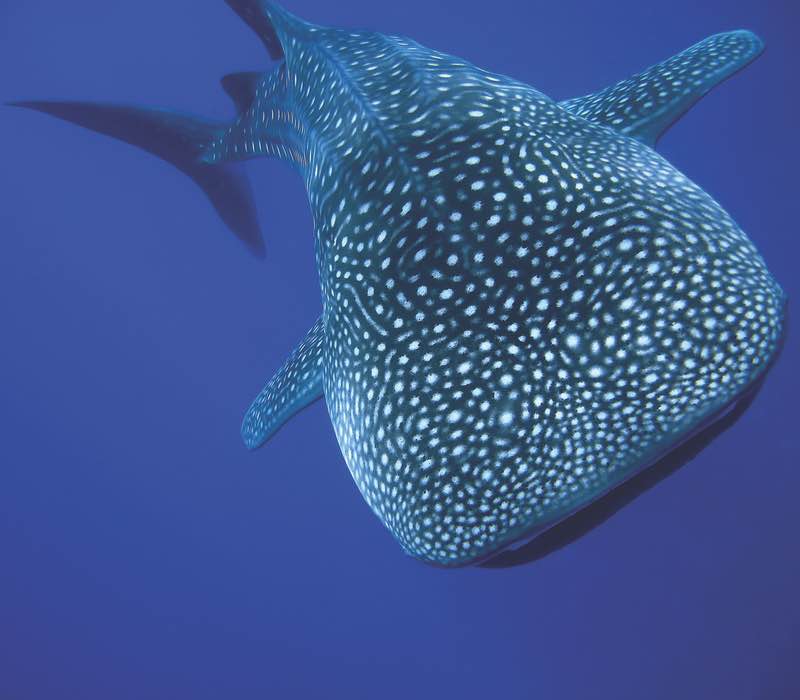 The whale shark, like the world’s second largest fish, the basking shark, is a filter feeder growing as long as 60 feet, can weigh up to 20 tons, and can live to over 100 years old. Though they are big, their brains are tiny. They are widely distributed and found worldwide in tropical and warm temperate seas, except the Mediterranean. As it swims, it sucks water through its gargantuan mouth, as wide as 5 feet, then filters out plankton and other microscopic organisms through its gills.

Whale sharks are fish, and therefore obtain oxygen via their gills. They have no physiological requirement to swim at the surface – unlike air-breathing whales and dolphins. Whale sharks have a broad distribution in tropical and warm temperate seas.

The researchers know very little about whale shark reproduction and life history. Only one pregnant whale shark has ever been physically examined by scientists. This singular shark, caught in a fishery off Taiwan in 1995, carried over 300 pups inside her. That is almost twice as many as any other shark species. They do not know if this is normal. They still do not know how often females produce pups either.

There are several sites where large numbers of whale sharks aggregate, attracting tourists from all over the world. Most of the sharks present at these sites are juvenile males between four and nine meters in length. The species is considered endangered, but it continues to be hunted in parts of Asia, such as the Philippines.

In La Paz Bay, a whale shark monitoring program since 2003 shows that up to 66% of juveniles have been hit by boats. In collaboration with the Mexican government, a Code of Conduct was generated for whale shark tour operators. Regulations include staying 10 feet distance away from the shark’s head, no more than 5 people in the water with one shark at a time, and no touching the animal. All boats are monitored by GPS.

Always choose a responsible tour operator on your vacation. Help to keep these giant gentle animals alive for the next generations.