1st, Dinner on the Beach at Casa Calavera

On June 1st at 7:30pm, join Casa Calavera for the first of many dinners on the beach where they will feature 5 delicious courses paired with Clase Azul Tequila for $1,500 MXN (~$80 USD)! To reserve your seat, email RSVPloscabos@casacalavera.com. The menu will be released soon on Casa Calavera’s Facebook page. Space is limited so book today!

Mark your calendars, gather your friends & family, and kick-off your summer on June 6-8 with some fun in the sun and competitive fishing in Cabo San Lucas. The 6th Annual Pelagic Triple Crown of Fishing Tournament offers well over $350,000 in cash prizes! Target Species include Striped Marlin, Blue Marlin, Black Marlin, Sailfish, Tuna, Dorado, and Wahoo. www.PelagicGear.com

Henrry Lopez Studio presents the Greatest Showman The Musical, on June 7 at 8pm, June 8 at 6pm and 8:30pm, and June 9 at 1:30pm and 5pm at the Cultural Pavilion in downtown Cabo San Lucas. The Greatest Showman The Musical was inspired by the magical life of circus owner, showman and entrepreneur P.T. Barnum, founder of the Barnum and Bailey Circus. For more information and tickets, please call (624) 358-6111 or visit @HenrryLopez.Estudio on Facebook!

The 4th Paellas Festival is a cooking challenge created to benefit the Los Cabos Rotary Club Scholarship Program. Fifteen hotels will compete to win the title of best paella of the year in Los Cabos. The event will feature live music in a family friendly environment. Tickets cost $750 MXN and will include samples of each paella as well as two glasses of wine. For more information call (624) 144-3622 or email jarocho@clubrotarioloscabos.org.mx.

The second Las Hamacas Trail Run will take place in La Paz on Sunday, June 9 at 7:00am. The 3k, 8k, 16k trail run by Waikuris will benefit Corazón de Niño and celebrate “Global Running Day.” The entry fee is $350 MXN or people with special disabilities and children 6-12 years are $300 MXN. Visit www.TimerMexico.com for information and registration!

On June 1st at 7:30pm, join Casa Calavera for the first of many dinners on the beach where they will feature 5 delicious courses paired with Clase Azul Tequila for $1,500 MXN (~$80 USD)! To reserve your seat, email RSVPloscabos@casacalavera.com. The menu will be released soon on Casa Calavera’s Facebook page. Space is limited so book today!

Both Mexico and the United States celebrate Father’s Day (Día del Padre) on the third Sunday in June. Celebrate and honor dad, as well as grandfathers, uncles, big brothers, and other important male figures at one of the many resorts, restaurants and bars around town. Many establishments will have Father’s Day food and drink specials to celebrate the day!

After six incredible years of the Los Cabos Open Of Surf, Boardwalk Productions and the Los Cabos Tourism Board decided to take a one-year break from the traditional Women’s QS and Pro Jr. events in order to create and celebrate the unique surf culture in Cabo with a one-weekend surf, fashion, food, and music festival, to be held exclusively at The Cape and Monuments Beach. On June 21-23, The Cape will host the 2019 Los Cabos Open of Surf, a weekend of prestigious, invitation only surf competition, swimsuit/summer fashion shows, live and EMD musical sets, art, cuisine, and so much more. With world class surfers, and an eclectic group of international professionals competing for the first ever, The Los Cabos Open of Surf Cape Trophy, surf fans will get a never-before-seen up close and personal and immersive look at high level surfing from the stunning viewpoint of The Cape. In addition to the surfing events and meet-and-greets with some of the World’s best surfers, The Cape will host nightly swimsuit and summer season fashion shows presenting an eclectic mix of designers as well as spotlighting some of the world’s leading swimsuit models. LosCabosOpenOfSurf.com

“La Fête de la Musique” started in France in 1982 as an initiative of the government to celebrate music and its performers and is now currently celebrated in more than 120 countries and 700 cities around the world as “The International Day of Music.” Fiesta de la Musica (The Los Cabos Music Festival) is the largest in Mexico and is considered one of the most anticipated cultural events by locals and tourists featuring all genres and levels of musical experience from beginner to professional. The 11th year of Fiesta de la Musica, organized by Promotora Cultural Vivarte AC, with the support of the XIII Los Cabos City Council, will be held on Saturday, June 22 in San José del Cabo with special guest performer Celso Piña and his Ronda Bogotá star musician. The free event has become a national and international platform for musical talent in the region and has grown into an iconic event and tradition in Los Cabos during every summer solstice. Destino Los Cabos is a proud sponsor of Fiesta de la Musica! For more information and schedule of performers visit www.FiestaDeLaMusicaLosCabos.net or @FiestaDeLaMusicaLC on Facebook!

The best trail race series in Baja California Sur is back! The second of 4 races in 2019 will take place in La Paz on June 23, followed by Night Fest on August 10, and Koral Canyon on October 27. This 8K and 16K race takes place on Sunday, June 23 at 7:15am with the start and finishline at MTB track “El Manglar” in La Paz. Participants will be broken into 3 different age categories and the cost is $400 MXN-$650 MXN. Registration is open until June 19 at Cabo Sport in San José del Cabo, Vélo Citti in La Paz, or online at Bit.ly/FH2019EM (with additional service charge). Contact hola@cabosport.mx or (624) 688-6755 for more information.

28th – Let’s Get Physical at OMNIA 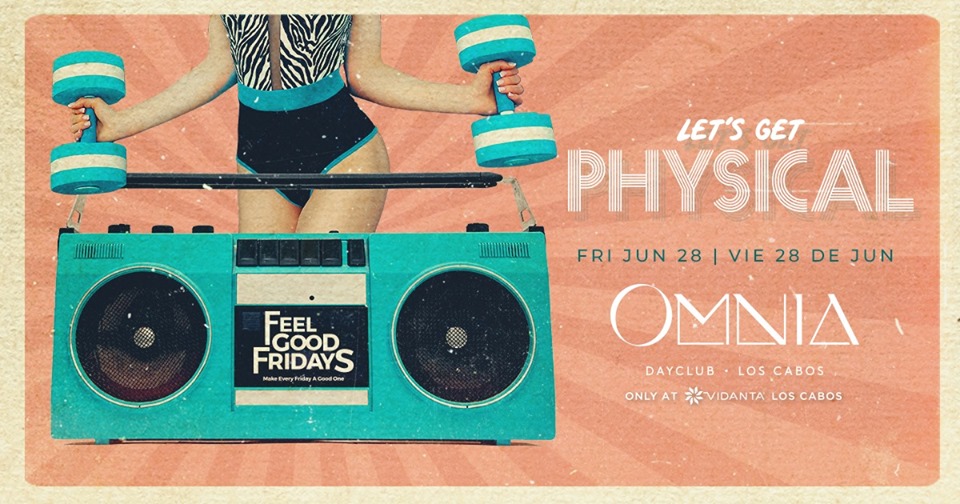 The 23rd Annual Stars & Stripes Fishing and Golf Tournament will be held from Thursday June 27 to Sunday June 30. Their website explains, “The Stars & Stripes beneficiaries receive much-needed financial assistance which they can use to expand their programs. Team registration fees pay for all costs of the event. When you make a donation to Stars & Stripes, proceeds are used to match dollars raised by the beneficiary charities, allowing the money they raise to increase and create more impact.” The always well attended event has raised and donated more than $29 million to worthy youth charities over the course of its 22-year history. For more information and schedule of events, please visit www.starsandstripestournament.com

Newer Giving Back – Creating a better tomorrow!
Back to list
Older Where The Locals Eat – May 2019