Loreto: A Voyage to the Past, A Voyage into Adventure

By: Roberto PadillaTranslation/Adaptation: C VeloBack in the 17th century, a beautiful community was founded on the shores of the Vermillion Sea, now known as the Sea of Cortez. The community that we now know as Loreto was established as part of a Jesuit mission, driven by the ambition of the Spanish Crown to expand into what promised to be a rich territory, and expand, they did. However, it was the beauty of the Sierra de La Giganta, the legacy of the native Guaycuras, and Cochimies people, and the beautiful natural setting, that would turn this community into the first capital of the Californias. This means that that long before the separation of the territories between Mexico and the United States – there was only one Territory called California. Did you know that the Sea of Cortez or Gulf of California was called Vermillion Sea because the first Spanish sailors saw a particular reddish color in the water, which reminded them of the bright scarlet pigment called vermillion? The name is registered in the “Sudcaliforniano” Dictionary as dating back to 1539, when Captain Francisco de Ulloa named the extension of the Pacific Sea that turns into a gulf and bathes the shores of the Baja peninsula and the northern Mexican Pacific as “Mar Bermejo’ which translates into Vermillion Sea. It wasn’t until much later that the name of “Sea of Cortez” became more commonly used, even though it was the first name of the Gulf of California, as it was Hernán Cortez himself, Mexico’s Conquistador, who coined the name when he landed in Santa Cruz back in 1533, but the name didn’t become popular until well after this death. 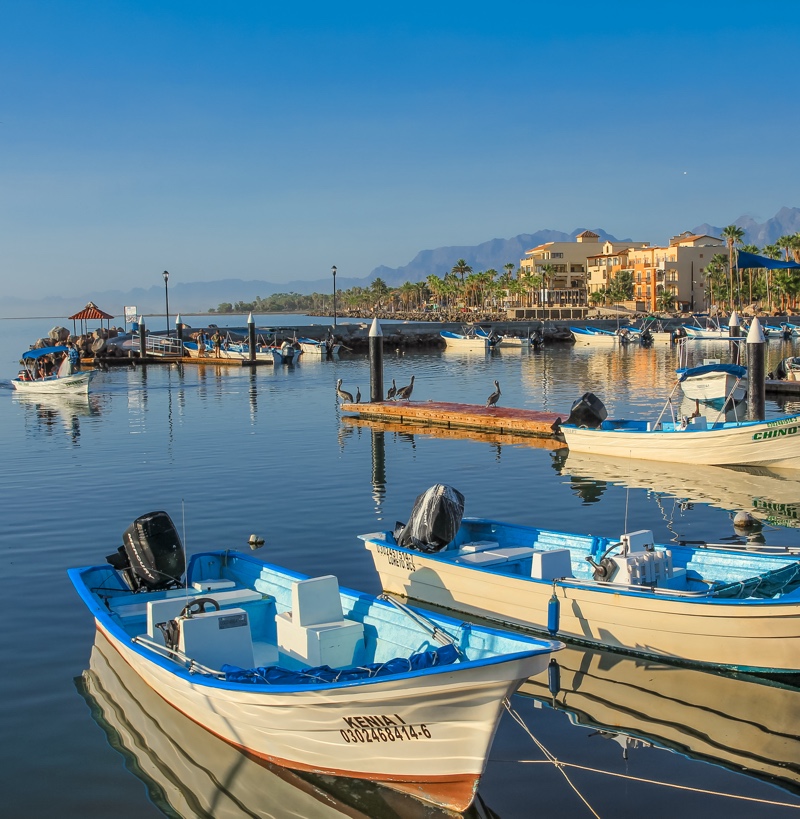 More than 300 years ago, all travelers landed in Loreto by sea before venturing into the rest of the peninsula. Nowadays it is more common for visitors to arrive in Los Cabos and then explore the wondrous areas in the rest of the Baja. When you travel along the Transpeninsular Highway from Los Cabos to Loreto, right where the Sierra de La Giganta looms its rugged mountains towards the Sea of Cortez, you glimpse a specular view that will take your breath away. A landscape that resembles a Japanese watercolor unfolds in front of you, as you climb up into the Sierra. Once you reach approximately 2,600 feet in altitude and realize that you will descend to sea level in less than five minutes to reach the coast, the drive becomes a real adrenaline rush!Your next stop is just a few miles away, the Danzante Bay resort development welcomes you with an amazing view of the bay and its natural lagoons. Once at sea level, you will not cease to be surprised, as you follow the shore for close to 25 miles where you will find two small fishing villages, Puerto Escondido and Juncalito, where you can enjoy delicious food and relax from the drive. As you approach Loreto, you must make a mandatory stop at “El Mirador”, which means the lookout point, where you can admire the majesty of the “Bahía and Islas de Loreto” National Park. Throughout this drive, you will continue to be mesmerized by the beauty of the Sierra de La Giganta, as the height and ruggedness of the mountains is an unexpected and beautiful surprise. Within those mountains, there is a natural diversity that will amaze you, it is full of canyons with streams, oases and cave paintings, home of the bighorn sheep and many other species. Once in Loreto, you can always find a local tourist guide to explore Tabor Canyon and experience some of this the incredible biodiversity. Another incredible option is to visit the cave paintings known as “Las Pintadas”, which experts have dated as being 7,000 years old. While these caves are easily accessible, you must visit them with the help of a local expert. The bonus of it being that as you venture into the mountains your guide will share wonderful stories of the Jesuit missionaries and the famous road that extended throughout the Old Californias, the “Camino Real” that started in Loreto, back in the 17th century.The Islands of Loreto are beautiful but also hold great importance to Conservationists as they represent one of the richest marine life habitats in Mexico, a paradise for divers who come from all over the world to marvel at all the species and diversity of the wildlife inhabiting these waters and shorelines. One of these islands is Isla Coronado, which is the easiest to access, and where you can experience a great day exploring this idyllic paradise.Loreto and its surrounding areas are steeped with more than three centuries of history and the work that Mother Nature has done for millennia. Ancient humans painted caves in the area 7,000 years ago. Now it’s your turn to witness its wonders, listen to its stories and make your own memories.