In The Spotlight – Pisces Sportfishing

April 15th, 2019. Anglers on board of the Pisces Sportfishing 31’ Bertram, “Tiburon” were about to call it a day when a marlin hit their trolled lures. It hit so quickly that they didn't even get a good look at it, and during the fight they estimated it at about 300 lbs. Boy where they wrong... the fish ended up being one of the largest marlin caught in Cabo San Lucas history; which if caught during a tournament, like last year’s Bisbees Black & Blue, would have earned them up to $3 Million dollars. In this case, it earned four novice anglers memories to last a lifetime, and a hardworking crew, the recognition they well-deserve. 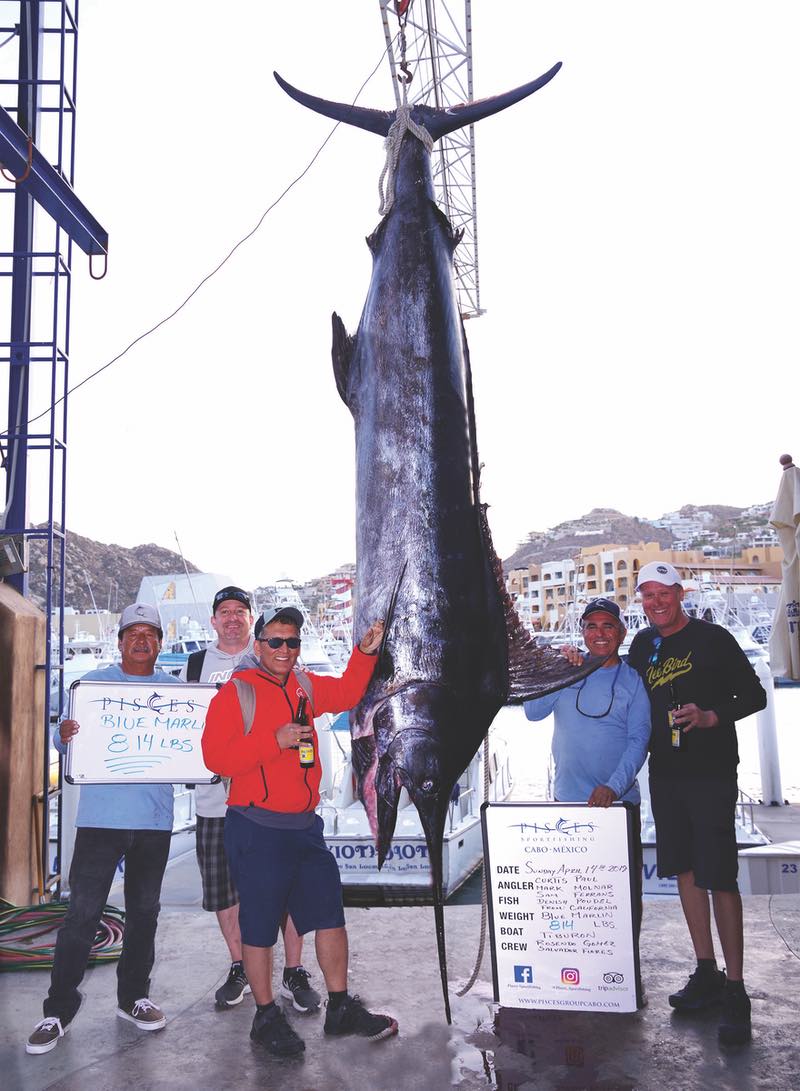 As the fight with the monster fish took its toll on the first angler, he passed the rod on to the next and so on. After a few hours, they realized, the fish had unfortunately died on them, although the original intent was to tag and release it. Now their job would be even harder, as they would have to reel in dead weight. The Captain and Mate did not give up and aided the anglers for another 2.5 hours, until they got the marlin to the boat. At almost 15 feet long and 6 feet around, they were unable to load it into the boat and had to call for back up. Finally the fish made it to the docks, and as the crane lifted it to the weigh station a 30 lbs dorado fell out of its mouth. Its unofficial weight marked 814 lbs.

Pisces prides themselves on “Catch and Release”, releasing almost 99% of the marlin they catch every year. Pisces is also working with conservationists and scientist to protect and research our fisheries, tagging all of their billfish, which last year earned them the award for “ Top Tagging Fleet in Mexico” by Gray Fishtag Research. Although sometimes, like in this case, a tag and release is not possible.

Pisces celebrates 41 years this April since they began, making them the longest established Sportfishing fleet in Cabo. When it comes to days like April 15th, and any day really, you want a fleet like this on your side. Experienced crews with attention to detail, service and a can-do attitude. Not only this, but Pisces gives you options, with sportffishing vessels starting at 28 feet and even offering Luxury Yachts of up to 160 feet in their ever-growing Pisces Yachts division.

No matter your preference, wether it be fishing, or luxury, or a bit of both. Pisces is dedicated to making your dream come true.our bucket list. Other nearby islands include Cerralvo Island, which is great for diving, scuba and snorkeling.