If you’ve made it to Los Cabos, there’s a good chance you may be tempted to indulge in the sacred spirits of Mexico, mezcal and tequila. But before you dive in, it’s best to get an understanding of the spirits rich history and the artisanal process. Then you can appreciate the pride Mexican culture has for these distinct and complex spirits.

The Origin – The Elixir of
the Gods

Mezcal predates tequila and has a long history in Mexico. The agave plant, which makes both mezcal and tequila, is a cherished plant with deep ties to indigenous cultures. For hundreds of years, the agave plant was a prominent feature in religious ceremonies, mythology and trade. Early communities learned to cook the heart of the agaves, called piñas, to ferment the juices and create an alcoholic beverage named pulque. However, mezcal and tequila came some 1,500 years later with the arrival of the Spanish.
While it’s hard to trace the first appearance of mezcal, one myth says a lightning bolt came down from the heavens, struck the agave plant, cooking and releasing its juices. Through this act of heaven, mezcal became known as, “the elixir of the gods.”
The Spanish conquest of Mexico marks the arrival of distillation in the America’s. The Spaniards had brought a large cache of alcohol to America, but as supplies dwindled they started experimenting with local ingredients like agave. Through a process of cooking, fermenting and distilling the heart of the agave, mezcal was officially born. Years later, a slight alteration of the production process birthed the spirit tequila.

The rest, as they say, is history.

Mezcal vs. Tequila – What’s the Difference?

Although tequila has gained worldwide popularity, here’s the thing most people don’t realize: tequila is a type of mezcal.

Why is this true?

Mezcal includes a broad category of spirits made in Mexico from the different version of the agave plant. Tequila is one specific kind of mezcal.
Mezcal comes from many different varieties of agave. However, tequila is made with a specific kind of agave plant, called agave tequiliana, or blue agave. Mezcal and tequila also follow slightly different production process, which changes the taste of each spirit. 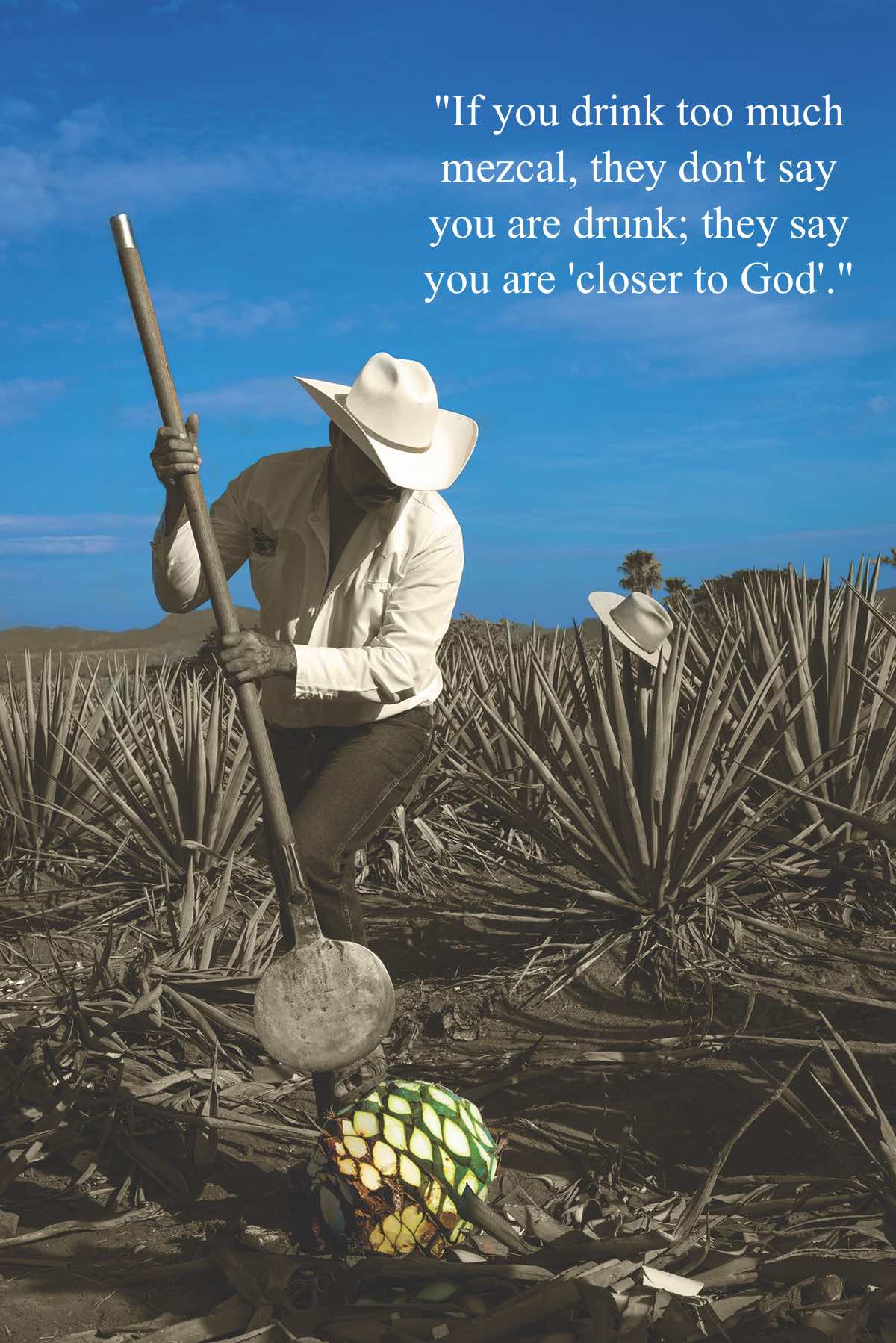 Wild or farmed agaves are harvested and roasted in stone-lined pits over a wood fire. This cooking method is what gives mezcal its characteristically smoky flavor. Once cooked, the agave is mashed in large stone grinders and then moved to exposed wooden vats for fermentation. After two rounds of distillation, the end product is mezcal.
While some mezcal is aged in barrels after distillation, mezcal enthusiasts consider young mezcal (not aged) the purest form. Mezcal production varies per region, but each is a hands-on, artisanal process passed down through generations of Mezcalero’s.
The government recognizes only 8 of Mexico’s 31 states as mezcal producers, but local varieties are produced countrywide.

Tequila comes from a specific kind of agave plant, the agave tequiliana, or blue agave. Instead of being cooked underground on wood fires, tequila hearts are steam cooked in brick ovens or stainless steel vats. The rest of the process is the same, with cooked agave being crushed, left to ferment, and distilled a minimum of two times.
Traditionally, tequila has relied more on the process of aging to produce reposado (rested) or anejo (aged) tequilas. During the aging process, tequila sits in oak barrels previously used for bourbon production, for anywhere from 2 months to 3 years or more. This process impacts the tequilas flavor profile as well as the color.
Tequila is also limited in its production areas. However, the majority comes from the state of Jalisco.

Mezcal is known as the smokier of the two spirits, but traditional mezcal will also highlight flavors of the plant though hints of sweetness, citrus and floral flavors. Like wine, small-batch mezcals are impacted by the soil and growing conditions, so each artisanal batch tastes slightly different.
The traditional way to drink mezcal is neat, at room temperature. Mezcal is also often served alongside orange slices dusted with sal de gusano (a mix of rock salt, ground chiles and roasted ground worms). Whatever you do, don’t shoot it. Instead, sip slowly to enjoy the variety of flavors and connect with the essence of the spirit.

If you’re more into cocktails, try mezcal in your margarita, or in place of whiskey, as in a mezcal old-fashioned.

But to get the authentic flavor experience, try a flight of mezcal made from different types of agave. We’ve listed a few of the most common below.

Arroqueño – A huge agave plant, arroqueño can take up to 20 years to mature. Taste Profile: Floral and vegetal with notes of spice and dark chocolate.
Espadin – The most common form of agave used for mezcal, espadin is widely farmed and also grows in the wild. Taste Profile: Comes in a variety of flavors, depending on the producer.
Tobalá – This mezcal is typically more expensive because it only grows in rocky, shaded areas and must be pollinated by animals such as birds and bats. Taste Profile: Complex and fruity.
Tobaziche – Grown all across Mexico, this agave has different flavors and names based on where it’s produced. Taste Profile: Pleasant, savory and herbal.
Tepeztate – A rare form of mescal, this agave takes over 30 years to mature. Taste Profile: Aromatic, intense flavor.

The taste of Tequila is complex and varied, from herbaceous and citrusy blancos to caramel and vanilla reposados, to smooth and oaky anejos. Like all mezcal, the best way to taste the flavor of quality tequila is by sipping it neat.
With tequila’s popularity, there are also dozens of tasty cocktails available that take advantage of tequilas unique flavor profiles.
When you’re out at a restaurant or bar, the choice for tequila comes down to brand preference and choosing one of the four different styles: blanco, joven, reposado, and anejo.

Blanco – Also known as silver, or plata, this is the blue agave spirit in its purest form, typically un-aged. Taste Profile: Clean, floral, citrus.
Joven – Also known as gold orotequila, this tequila has added colorants, flavorings and sugars. Gold tequila is not pure tequila, and, and in my opinion, should be avoided at all costs. Taste Profile: That “bad shot” of tequila you had in high school.
Reposado – A reposado is ”rested” tequila that has been typically aged in oak bourbon bottles anywhere from 2 to 11 months. This aging process leads to a more complex taste and the golden-hued color. Flavor Profile: Sweet, balanced flavor of agave and wood.
Anejo – An anejo is ”aged” tequila that has gained flavor and complexity within a barrel for one year or more. There is also extra anejo, or ultra aged, which have been aged for over three years. Flavor Profile: Smooth, complex and rich, with the most aged tequila reminiscent of bourbon.

Mexico is for Mezcal

Mezcal is a Mexican tradition, a spirit to be shared and enjoyed amongst family and friends. So if you’ve made it to Los Cabos, do yourself a favor and indulge in some mezcal, the spirit of the gods.

5 Films You Can’t Miss in the Los Cabos Film Festival 2022
Read More
Where Millionaires Vacation
Read More
Bisbee’s Fun Facts
Read More
In case you missed it: The winners of the 3rd Edition of the Culinary Awards
Read More