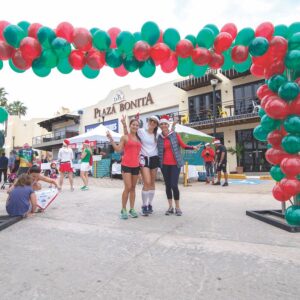 Destino Los Cabos and Running Tours Los Cabos presented the first annual Holiday Fun Run benefiting the children of Los Niños del Capitán on December 16. Participants had the choice of running a 3k, 5k or 8k route and received a commemorative bandana and a medal at the finishline. In lieu of an entry fee, runners were asked to bring an unwrapped toy or cash donations. At the end of the day, we raised over $7,600 pesos and a big box of toys for Los Niños del Capitán! We would like to thank everyone who came out for this year’s event, and a very special shout out to our volunteers and supporters: REmexico Real Estate (office/staging area), Carla Brown with CB Photos (photography), Jaime Llaca with Drone in Cabo (photography and drone video), Oscar Mendoza (drone photos and video), DJ Daniel Romo, DJ Lalo Cornejo, and DJ Francisco (live music), Alex DJ Cabo Events (finish line towers), Alex Navarro (sound equipment), Ciclovia Recreativa Cabo, and all the wonderful volunteers from Los Niños del Capitán for directing our runners. We couldn’t have done it without you! Save the date for our 2019 Holiday Fun Run on Sunday, December 15, 2019! @destinomagazine 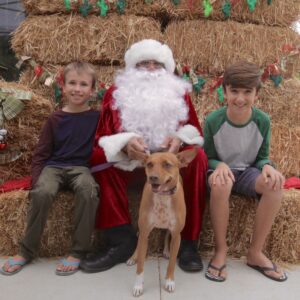 Eclectic Array at Flora Farms hosted their annual Santa Paws event benefiting local dog rescues on December 16. People and well-behaved pets were invited to have their photos taken with Santa in exchange for donating pet food, toys, bedding, towels, cleaning supplies, etc. Well-known local pups Powder from Coffee Lab and Sparrow from Eclectic Array were in attendance to accept donations and mingle with guests. Several puppies up for adoption from Acre Dogs also stopped by, hoping to find a “furever” home. There was even a fun hand dyed pet bandana workshop. All donations were divided between El Ranchito, Cabo Critters, Baja Safe, Cabo Kittens, Acre Pups, and Casa Sheila. @MyEclecticArray 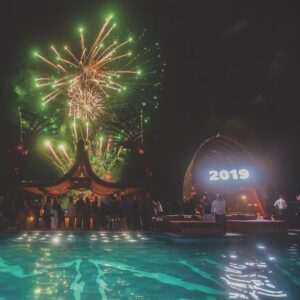 OMNIA Los Cabos celebrated their first New Year’s Eve party since opening in early 2018 with a special performance by Jermaine Dupri! The night started off with a three-hour open bar for guests who purchased this admissions package at Omnia Main Bar and inside Casa Calavera bar. The bars were never overwhelmed, working together harmoniously, and all bar staff remained constant with at least 2 deep, until open bar ended at midnight. As expected, tables came in later, and by midnight, most tables were ready for the New Year countdown. The countdown was kicked off by Jermaine Dupri followed by an illuminous fireworks demonstration at midnight. The 2-minute show kept everyone’s attention as the bright colors decorated the sky. Jermaine Dupri played high-energy beats mixed with some laid-back classics, and the crowd helped celebrate the beginning of 2019 by singing along to his music.
@OMNIALosCabos 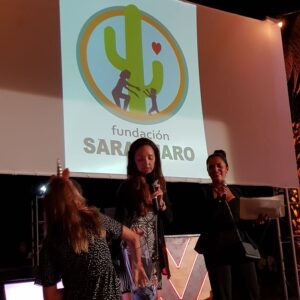 On January 12, the Sarahuaro Foundation hosted their 1st annual fundraising gala dinner at Montage Los Cabos organized by Eclectic Array and All Access Cabo. The “Let’s Make Magic” event included a five-star gourmet dinner, cocktail reception, live auction and raffle under a “big top” of sparkling lights. Las Ventanas Al Paraiso resident Magician Sterling dazzled guests, along with jugglers, fire dancers, stilt walkers, and more throughout the cirque themed evening. Sarahuaro provides healthy meals to more than 350 kids each day during the school year as well as providing educational programs for impoverished women. The goal of this magical event was to raise $60,000 USD to support the women and children of the Sarahuaro Foundation. @Fundacion.Sarahuaro

On December 15, Casa Amigos Mexican BBQ and Sports Bar celebrated their Grand Opening in the building formerly occupied by Desperados. It was a packed house on this Saturday evening with a live band and delicious cocktails. The tasty new menu offers starters like Queso Fundido, Nachos, Tuna Tartar, Buffalo Chicken Drums, and Pulled Pork Sliders. Main course options include BBQ Baby Back Ribs, Slow Cooked Brisket, Short Ribs, Cajun Pork Chop, New York Steak, Surf & Turf, Jumbo Shrimp and more! They also have a taco menu with choice of Shrimp or Fish Tempura, Grilled Chicken, Beef or Pork. Although I didn’t have the opportunity to have dinner at the Grand Opening, I cannot wait to go back and try it for myself. The dishes and smells coming out of the kitchen were absolutely mouthwatering! @CasamigosCSL